Written by Andrew Shanks
Updated over a week ago

On AskNicely's People page, we have the ability to ensure that people will not be sent emails by AskNicely. (The easiest way to do this is to click the "Deactivate" button on the People page.)

To switch between seeing Active, Inactive, or Active AND Inactive People, the dropdown shown below - found at the top of the People page - lets you switch between these lists of people. 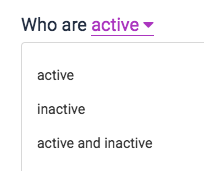 If people are on the Active list: They will be surveyed if...

If people are on the Inactive list: They will not be sent surveys. That said, there are several ways a person can become "Inactive":

Special Note for Web Surveys: When using InApp/Web Survey, people who are "Deactivated" can still be shown a survey, so if you really don't wanting them to receive a survey, you'll have to unsubscribe them.

Did this answer your question?